Constantine’s mother died when he was only four. His father died soon after as part of the Russian army. Left alone with several siblings, it is surprising that he was the only one separated and put with a different uncle.


Unfortunately, life in his new home didn’t go well. He was not allowed to attend school at first, and when he was, he had to walk miles there and back. When it came time for university study, he was told there would be no help from the family. Still he was determined and went to take the entrance exams. He found a place to stay, but the problem was, he had no food.


For two weeks he didn’t eat. Other students noticed, and they helped him with food. He made it into the university, trained, and became a French teacher. Still life was difficult, since teachers, even today, only make about $200 a month.


Despite the hardships, he raised a family, and his daughter became a Seventh-day Adventist. She invited him to our meetings. The picture is of Constantine with one of our It Is Written volunteers, Pastor Victor Maddox.


Constantine has been faithfully attending each night until a couple of nights ago I saw him putting on his coat. What was happening? Did I offend him? His daughter and her husband put on their coats as well. From the pulpit, I could only wonder what the problem was as I tried to focus on the presentation.


As soon as I was done, I asked around. Constantine had been taken to the hospital. What was happening with him? With not much way to communicate I had to wait until the next evening to ask about him again. The doctors found some irregularities but nothing too bad for a man of 81 in a country where the average lifespan is 71. When he came back, I mentioned to the congregation that it was good to see him back. He beamed brightly, settling in for the presentation.


Afterwards, I talked with him and the pastor, through my translator. How have the meetings been? Very interesting. Did you understand everything? Oh, yes.


Then I brought it home to his heart. Would you be willing to study with the pastor and be baptized? He paused. Looking directly at me he said, “I’ve been wanting to do that for a long time.”


It is amazing to see the Lord at work! There are others like Constantine, and your prayers are reaching the ear of the infinite God who touches hearts for Him. 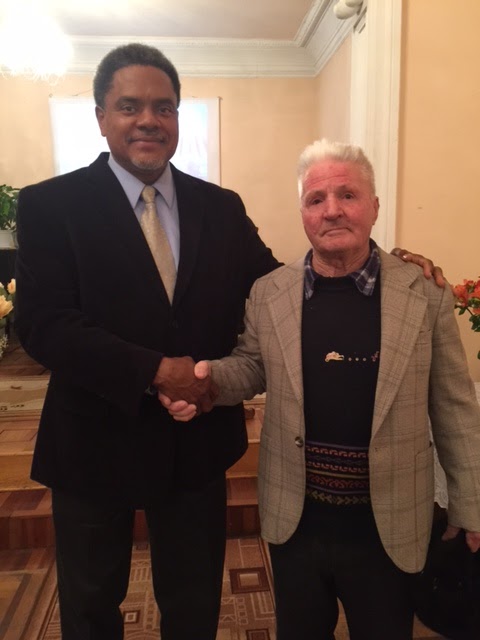