We serve a God who is on the move! Saturday night's meeting was amazing.

When we arrived, people were pouring into the school yard where the meetings are being held on the playground area. Bus load after bus load arrived. Some eager people even arrived crammed into the back of a dump truck! And still they kept coming.

We had 82 children for the VBS program, divided between two classrooms. One room did crafts while the other did songs and games. But even though we took up two rooms, kids were almost sitting on top of each other. But how excited they were to be there! They had so much fun putting together the craft and singing songs about Jesus.

The adult program had seats covering almost the whole playground, but it wasn't enough. About 550-600 found seats, but the other 150 stood just beyond the back row. Wow! Combined with the children we had a total somewhere north of 800. The evangelist preached with all his heart, and two people the Bible workers had been working with were baptized in the little pool you can see in the picture.

Many, even among our group of missionaries, were so touched by the scene, asking how we can help this happen back home. Didn't I say God was on the move? He is on the move, even among those who came to help. Good things are happening! 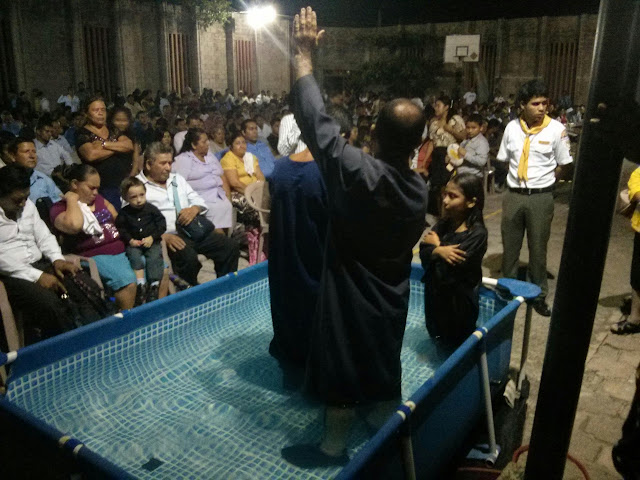